Keeping an Eye on Volatility

US cases increased by almost 56,000 on July 5th, a 2% rise that outpaced the 1.8% average daily increase over the past week, following moves in many states to allow business to lift strict shutdowns. While the news on infections and hospitalizations may worsen, massive economic closures across the US at large are not expected. Macroeconomic policy to date has been strong and effective, however Citi analysts now think the likelihood of a further fiscal package rises with the level of Phase 1 infections.

While continued spread of the COVID-19 in the US suggests careful monitoring, economic recovery prospects remain intact. US employment continued its rebound in June by 4.8 million with the unemployment rate failing to 11.1% (from 14.7% in April). Other data for June continued to show strong net gains reflecting the nature of the external shock, with purchasing managers data showing the strongest growth rates for orders and production since late June.

Geopolitical tensions also on the rise in Hong Kong & China

China’s National Security Law (NSL) for Hong Kong became effective as of 30 June. Following that, the US House passed the bill to sanction China’s and HK’s government officials for implementing the NSL. However, HK and Chinese equities closed the week on a positive note (Hang Seng Index and Shanghai Composite Index up 3.35% and 5.82% respectively) with markets likely focused on the recovery taking place in HK’s economy after a year-long recession. Retail sales volume rebounded 21% over the past three months, a record high.

While the road to an economic recovery may be a long and winding one, the NSL may relieve some near-term risks of large-scale disruptions to business activity due to social unrest, but implementation trends are likely to be closely watched. 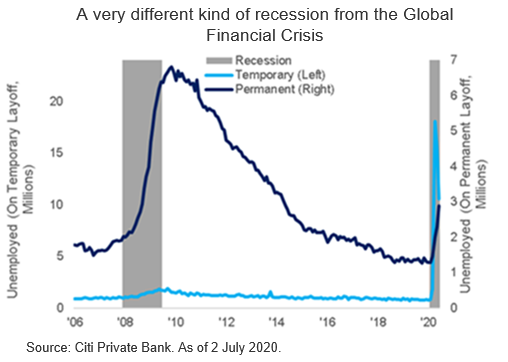 Past performance is no guarantee of future results. Real results may vary.

In the months ahead, occasional bouts of uncertainty and market volatility can be expected, with a potential re-emergence of COVID-19 cases, US-China relations and US elections among the top risks.

Citi analysts expect modest US large cap performance and selected cyclicals may catch up to defensives as the economy re-opens. Over time, Emerging Market equities offer attractive long-term valuation prospects, such as those in Asia.

Potential Headwinds for US Equities

With just 4% of the world population, new cases in the US are near 30% globally. A more sustained US fiscal response may be necessary and investors are also starting to focus on the US Presidential elections in November.

Amid tensions between US and China, Hong Kong's prospects have come under pressure. Citi analysts share their views on key financial and economic questions from investors.