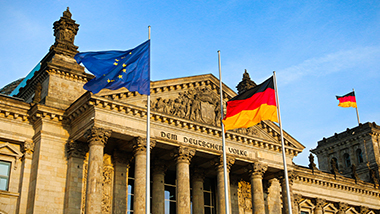 Angela Merkel is set for a fourth term as German chancellor although there was a sharp fall in support for her Christian Democrat-led alliance. While the rise of the right-wing AfD suggests that it will have a bigger influence on the political discourse in Germany, Citi analysts note that the AfD will be isolated by a united mainstream on key issues such as the European Union and the euro.

Angela Merkel is set for a fourth term as German chancellor after her Christian Democrat-led alliance (CDU/CSU) won Sunday's Germany Federal Election. However support for her party weakened sharply, down 9% compared to 2013, resulting in 32.5% of the vote.

Merkel's victory was marred by the rise of the right-wing AfD, which capitalised on her unpopular decision to keep Germany's borders open for more than 1m asylum seekers in 2015-2016. The AfD won 13.5% of the vote, up 9% from the last election. The principal loser was the SPD which received only 20% of the vote, leading the party leadership to decide to enter opposition and not seek another grand coalition with Merkel's CDU/CSU party. The pro-business liberal FDP and the Greens received 10.5% and 9.5% of the vote respectively. Six parties are now poised to enter the lower house for the first time since 1953. See table.

With 13.5% of the vote, the AfD will become the third largest group in the lower house. While it will have a bigger influence on the political discourse, Citi analysts believe that the AfD will be isolated by a united mainstream on key issues such as the European Union and the euro. The CDU/CSU, SPD, Greens and FDP will command around three quarters of the seats in Parliament.

Germany matters as it is the Eurozone's largest economy and plays a significant role in the European Central Bank's (ECB) monetary policy considerations, the management of the refugee crisis and Eurozone reforms. It is also likely to influence negotiations relating to the UK's exit from the European Union. Armed with the world's largest current account surplus of US$289b and its biggest budget surplus since reunification, Germany clearly has room to increase spending and help redress global economic imbalances.

While Citi analysts do not expect any major shift in German Eurozone policies after the election, the choice of coalition partner may add a new tone.

In the coming weeks, exploratory talks on alliances will begin. While the Greens have a pro-euro platform, the FDP has policy proposals which include phasing out the European Stability Mechanism (ESM) that could unsettle the Eurozone's financial stability and contradict reform proposals which French President Macron may outline in a speech on 26th September. Although this may raise investor concerns, Citi analysts stress that the FDP is a deeply pro-EU party and is likely to support policies needed to preserve the integrity of the EU and the Eurozone.

Citi's new base case is an alliance between the CDU, Greens and the FDP. In such an alliance, investors may see some deregulation and fewer labour reform reversals than with the SPD. The Greens may also secure more investment in renewable energy. All three parties are staunchly pro-European but there is likely to be greater focus on fiscal discipline and greater scepticism towards indebted periphery nations such as Greece in particular. Talks could still fail, forcing the CDU to revert to the SPD, so it may be too early to rule out a grand coalition entirely.

Citi analysts remain confident over the prospects for the German economy in 2018. The Germans can look forward to at least two rounds of tax cuts, probably in 2018 with middle-income households benefiting from income tax reforms worth as least €15b or 0.5% of GDP. Public investment also looks set to rise by around 0.2% of GDP from 2018, boosting the energy, transport, digital, education and defence sectors.

The positive outlook for Germany and broader Eurozone economy is one reason why Citi analysts favour European equities. Corporate earnings are expected to grow 12.5% in 2018 and valuations remain relatively attractive at 14x 2018 forecasted price to earnings ratio.

While there could be near term volatility in the euro as a result of the election outcome, Citi analysts expect further upside in the euro over the medium term, supported by still attractive valuations, a large current account surplus and prospective equity market inflows. Given the Eurozone's brightening prospects, other central banks may begin to add more euro in their foreign exchange reserves.

The strong euro need be not negative for exporters' earnings. Trade with other EU countries is still key, accounting for about 60% of trade across EU Member States on average although there are differences across countries. The latest Ifo export expectations show that the strong euro has yet to affect export volumes in the Eurozone.

As for bonds, while the ECB is expected to taper its asset purchases in 2018, the central bank's re-investments is likely to be still substantial at €15b per month by end 2018 versus €45b per month when the asset purchase program was fully running. As such, Citi analysts expect German Bund yields to rise only moderately to 0.75% by end 2018. The potential presence of the FDP in the coalition and its reluctance to extend fiscal aid to more indebted countries in Europe's periphery could see yields in the periphery rising more.