How has the market responded to Donald Trump President-elect?

According to Citi Analysts market is digesting the surprise victory of Donald Trump, and majority for the Republicans in the House and the Senate.

During the Asian session S&P futures fell by 5%, before inching back up to a 1.9% drop, with significant swings in emerging market currencies; specifically the "election barometer" of the Mexican Peso (MXN).

Are you a Citigold Client or Citigold Private Client?

For further details on the market response, Trump’s policies and expected impacts and investment implications, view the latest update "Eye on the Market – Update on US Presidential Election".

The year 2016 will be remembered as one of surprises. First the EU Referendum vote and now, the Republican candidate, Donald Trump has won the U.S. Presidential election to become the 45th President of the United States, succeeding Barack Obama.

Following the result, the latest view from our Citi Analysts is:

The lack of clarity surrounding likely policies provides significant uncertainty which the markets and investors will probably need time to adjust to.

Citi recommends that you manage your wealth with a diversified and balanced portfolio. To discuss the possible impact of the U.S. Presidential Election outcome, and the opportunities for your portfolio, please contact your Relationship Manager.

In less than 24 hours the US electorate will go to the ballot box to elect a new President. The campaign has seen significant swings in the opinion polls due to a number of media reports. The 45th President could be the first female to hold office, or a businessman.

The opinion polls such as fivethirtyeight.com had Hillary Clinton leading on 66.9% as of the 7th November*, with USD gaining ground on Monday after the FBI announced that they hadn’t found anything after a review of the new e-mails.

If you would like further information about the potential impacts to your investment portfolio, or make any transactions before the outcome, please contact your Relationship Manager.

On Wednesday 19th October, the third and last debate of the US Presidential Candidate series took place in the swing state of Las Vegas, Nevada. The debate was relatively more restrained than previous ones with both candidates focusing on policy issues. Key topics for the discussion were Supreme Court, immigration economy and fitness to be President. Though there was no clear winner from the debate, some media polls indicated Clinton winning the debate.

In the run-up to the debate, the Mexican Peso (which is acting as a proxy of sentiment) had already strengthened by 2.5% over the last three days, with limited movement in the overnight trading, during and after the debate. The Peso is currently trading at 18.52, back at the levels last seen beginning of September. Beside the Mexican Peso, most other markets are not pricing any significant premium for Trump winning the election at this point of time. 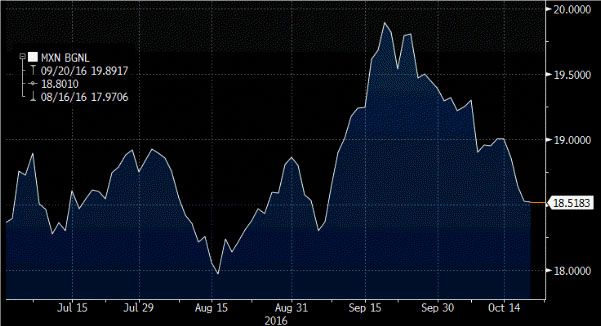 The election odds according to fivethiryeight.com have shifted back to a comfortable margin for Clinton. As of Monday 19th October, they place Clinton 87.3% and Trump 12.6%*. Citi analysts remain with their base case forecast of a Clinton win at the November 8th election.

On Sunday 9th October, the second debate of the US Presidential Candidate series took place in St. Louis, Missouri. The debate was highly charged, with both candidates attempting to discredit the other, with focus on scandal’s both past and present. In the days prior to Sunday’s debate Trump had been under scrutiny in the media due to negative news, with a number of Republican backers, rescinding their support.

The markets reacted to the debate with the Mexican Peso (which is acting as a proxy of sentiment) strengthening by 1.5% in early Asian trading. The Peso is currently trading at 18.97, back at the levels last seen on the 13th of September.

The election odds according to fivethiryeight.com have shifted back to a comfortable margin for Clinton. As of Monday 10th October, they place Clinton 81.5% and Trump 18.4%*. Citi analysts remain with their base case forecast of a Clinton win at the November 8th election.

The final debate in the series will be held at the University of Nevada, Las Vegas on Wednesday 19th October.

Yesterday night Mike Pence (Republican candidate and Indiana Governor) and Tim Kaine (Democratic and Virginia Senator) had the only vice-presidential debate, held at Longwood University in Farmville, Virginia. Overall it was a close debate, though media declared Mike Pence a close winner at the end of the night. Overall the tone of the debate was quite confrontational with limited discussion on real policy issues.

With the next presidential debate around the corner (on Sunday the 9th of October), any potential impact of the Vice Presidential debate is likely to be limited. Market reaction to the debate was also muted with the Mexican Peso, which is being watched as a close proxy to the US election by many market participants, moving little during or after the debate.

After good performance in the first Presidential debate, Hilary Clinton has extended her lead over Donald Trump and currently leads by over 4.6%1. Citi analysts base-case scenario is that Hillary Clinton will win the election, which should benefit risk appetite. Citi analysts currently put the chance of Trump winning at 40%.

As we near the final quarter of 2016, Citi analysts believe there could provide further volatility in the FX and Gold markets, as there will be the presidential race and the possibility of the US Federal Reserve hiking interest rates in December.

The US Presidential Election campaign 2016 is in the final furlong, with the first live head-to-head debate between the candidates, Hillary Clinton and Donald Trump taking place. The debate was broadcast during prime time Monday night TV in the US with a record breaking 84 million viewers. As the election date nears (8th November 2016), the opinion polls have become tighter, after the debate Hillary Clinton was estimated, by The Upshot Forecast, to have a 71% chance of winning the presidency.* Citi Analysts base case scenario is that Hillary Clinton will win the election, and put the chance of Trump winning at 40%.

The outcome of the first televised debate according to the markets, was that Hillary Clinton was the “winner,” with the Mexican Peso (which is acting like a barometer for sentiment) strengthened by nearly 2% (USDMXN).

As we near the final quarter of 2016, Citi Analysts believe there could provide further volatility in the FX and Gold markets, as there will be the Presidential race and the possibility of the US Federal Reserve hiking interest rates in December.

2016 has already provided a significant, and sudden move in a G10 currency (GBPUSD -11.8% YTD**) after the EU Referendum vote. Citi Analysts don’t forecast the same types of movement for the USD around the outcome of the election; however a Trump victory they believe would see a shift to safe haven assets, with the USD benefiting. In the next 3 months Citi Analysts forecast GBPUSD at 1.2800, EURUSD 1.1300 and USDJPY 100***.

In the environment of ultra-loose monetary, and events that have provide further uncertainty (EU Referendum) year-to–date Gold is up 26%. Citi Analysts have raised their 4th Quarter Gold forecast to $1320/oz, however under a bullish scenario for Gold, of a Trump win, and fears over worsening global economy and dovish Federal Reserve, they see Gold increasing to $1,425/oz.

Have you planned ahead for your financial goals? Most people have a financial target in mind such as starting a new business, their children or grandchildren’s education, retirement planning or charitable giving. For many people savings alone would not be enough to achieve their financial goals, this video looks at the behavioral studies of investing and how to overcome common fears of investing.