According to Bloomberg, as of 29 March, there are now more than 713,000 confirmed cases in 177 countries. US has overtaken China as having the most cases, with more than 138,000 cases. Citi analysts see the health crisis as poised for greater impact ahead. Cases in a variety of Western cities are following the lagged path of Italy. Similarly, some cities in Asia and even the Southern Hemisphere are seeing acceleration. At current rates of growth, the virus may hit its peak global exposure by late May.

Policymakers are taking extreme and unprecedented steps to limit the disruption’s long-term effects on economic viability. In the US, a US$2trn fiscal package (9.2% of GDP) with about US$1.2trn (5.5% of GDP) in direct stimulus was approved by the Congress, including significant increases for unemployment insurance benefits. The package also gives the Federal Reserve the ability to lever 10-to-1 new US$454bln Treasury equity capital to make loans through existing facilities and a new "Main Street Lending" program. The Federal Reserve has also committed to purchasing Treasury securities and agency mortgage-backed securities "in the amounts needed" to support smooth market functioning and effective transmission of monetary policy. The first time that global leaders have publicly pledge to act on a coordinate basis, the G-20 group announced to inject over $5trn into the global economy and committed to do "whatever it takes". 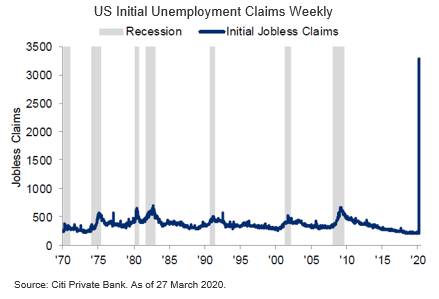 Citi analysts expect the largest decline in global GDP on record in Q1 2020, given the severity of economic contraction catalyzed by COVID-19. New country and city-level shutdowns are still expected ahead. China's gradual re-emergence from its shutdown offers glimmers of hope as to what could be a short contraction for the world economy in 1H. However 25% of US and European workers may become idle in coming months suggesting a potentially even larger decline in GDP than China, which likely shrank 5% YoY in Q1.

On the other side, the discrete nature of the health pandemic and swiftly building government policy response argues for optimism beyond the immediate period. Rapid growth rates from depressed levels can be expected if policymakers succeed in bridging over the period of collapsed demand.

If policymakers are able to compress a major economic shock into a relatively short period, high levels of financial market volatility are expected for the foreseeable future. This means assets may be whipsawed by the collapse and recovery within the coming few months. Amid large daily market movements, Citi analysts prefer diversified long-term portfolios.

Citi analysts have lowered global growth forecasts for 2020 by 1.2pp to 1.3% and raised 2021's by 0.2pp to 3%. The base case expects a sharp deceleration of economic activity in the first half of 2020, followed by a modest rebound in the second half.